YuPcre2 is an up to date regular expression library for Delphi with Perl syntax. Directly supports UnicodeString, AnsiString, or UCS4String, as well as UTF-8, and UTF-16. 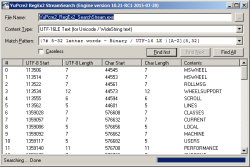 The YuPcre2 RegEx2 classes descend from common ancestors which implement the core functionalities:

Users familiar with the DIRegEx might be interessted in the differences between YuPcre2 and DIRegEx.

The YuPcre2 regular expression pattern syntax is mostly compatible with Perl. It includes the following:

YuPcre2 can Replace, List, or Format regular expressions matches or any of its substrings, useful for text editors and word processors. Variable portions of the match can be included into the result text. The full match can be referenced by number, substrings also by name. The character to introduce these reference is freely configurable. FormatOptions allow to turn features on or off as required. 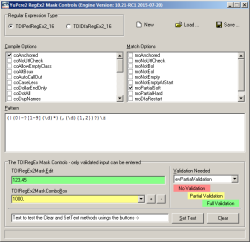 The regular expression mask edits can:

TDIRegEx2MaskEdit is an edit control that validates keyboard input on a keystroke by keystroke basis. It accepts characters entered only if the new text matches the regular expression mask pattern. If the new text does not match, the character is silently rejected.

TDIRegEx2MaskComboBox is a combo box control with essentially the same regular expression validation as TDIRegEx2MaskEdit. Additionally, it allows to select values from the combobox drop down.

The YuPcre2 RegEx2 Workbench helps to design and test regular expressions. It allows to set options, measure execution times, and to save and load settings for later use.

The YuPcre2 RegEx2 Workbench is available as