You are here: Yunqa • The Delphi Inspiration » Delphi Components » DICreole

DICreole is a markup parser, converter, and document creator from Creole syntax to, among others, HTML, RTF, LaTeX, as well as custom formats, for Delphi (Embarcadero, CodeGear, Borland). 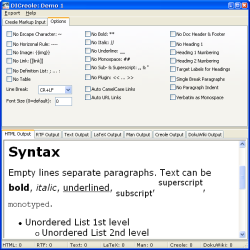 The Creole markup language is based on extensive research on common wiki markup elements and developed at http://www.wikicreole.org/. It is mostly designed for Wiki systems in mind, but network and standalone applications can also benefit from its simple but powerful markup language: 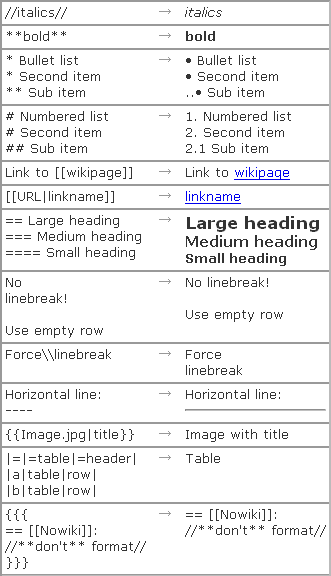 Text with markup is plain text with a few character sequences which are recognized by the markup processor and change the format of the result. The result is styled text with titles, paragraphs with justification, bold and italic faces, etc.

There are two kinds of markup constructs: blocks and inline. Blocks are paragraphs (indented or not), headings, list items, table cells, horizontal rules and block extensions. Inline constructs are character styles, verbatim text and links; they are part of blocks. Except in preformatted blocks, sequences of spaces or tabs are replaced with single spaces.

Lists are collections of items. There are three kinds of lists: unnumbered lists, numbered lists, and definition lists. Lists can be nested; they end with the next heading, indented paragraph, table, or blank line.

Unnumbered lists are represented as indented paragraphs with a bullet. Each item begins with a star character (*); it can span multiple lines.

Numbered lists are represented as indented paragraphs with a number. Items are numbered automatically with consecutive integers starting at 1. Each item begins with a sharp character (#); it can span multiple lines.

List nesting can combine different kinds of lists. Sublist items begin with multiple markers, the first one(s) corresponding to the enclosing list(s). For instance, items of an unnumbered list nested in a numbered list should start with #* at the beginning of the line, without any preceding space. For clarity, list markers should be used in a consistent way; but only the first item of each list fixes the kind of the whole list.

Tables are rectangular array of cells. They are made of one line per row. Each cell begins with character |. Heading cells (typically displayed in bold face) begin with |=. Rows may end with a trailing |.

In the table below, the first row and the first column contain headings. The very first cell is empty.

In preformatted text, lines which begin with }}}, with leading spaces or not, must have an additional space which is discarded in the output.

Sequences << and <<< are reserved for extensions.

Inside paragraphs, indented paragraphs, headings, list elements, and table cells, the following two-character sequences toggle on or off the corresponding style. It is not mandatory to nest spans of styled characters between matching style sequences. Style is reset at the end of text block.

Double stars and double sharps are interpreted as the beginning of list items when they are the first characters of a line in the context of lists. To be interpreted as style markup, they can be preceded by a space.

The tilde character, when followed by any character except space, tab or line feed, is an escape character; it is not displayed and the next character loses its special meaning, if any.

Verbatim text is a sequence of characters enclosed between {{{ and }}}. After {{{, all characters are output verbatim, without any markup interpreting, until the next }}} or the end of text block. Multiple spaces and tabs and single line feeds are still converted to single spaces, though. Verbatim text is an alternative to the escape character; it is more convenient for sequences of characters.

Except in preformatted blocks, line breaks are not preserved. The sequence \\ forces a line break.

Hypertext links (URLs) are enclosed between [[ and ]]. The text displayed as the link is either the same as the URL itself if there is no | character, or it is what follows |. No markup is recognized in the URL part; what follows | can contain styled text and verbatim text. Spaces surrounding | are ignored.